The Power of Overdoing It

When taking on a new project or making a career move, the more effort you put in up front, the better your results later on 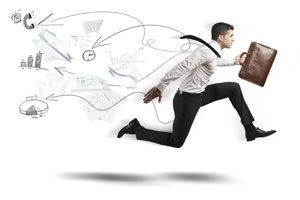 How are homebuilding and résumé building alike?

A former construction supervisor for a real-estate development company, Larry Weidel oversaw the building of a hundred custom houses and experienced time and cost overruns on almost every one despite padding project budgets by 30 percent or more to cover unexpected problems and expenses.

“Human nature is such that we all underestimate, when we start a project, how much time, effort and money will be required,” says Weidel, now a career coach and blogger.

That’s why he urges people who are starting a business, launching a new product or making a bold career move to “push themselves until they have nothing left to give.” Preceding every stratospheric achievement (as opposed to run-of-the-mill gains like a promotion to middle management) is a period of utter exhaustion, he says.

“Planes burn a huge percentage of their fuel just getting into the air,” Weidel says. Likewise, a project launch requires “everything you’ve got to get it off the ground.”

A half-hearted or tentative effort won’t do. “The start makes or breaks everything that comes after. In the beginning, we never know exactly what it’s going to take to win. We don’t know what hurdles we’re going to face,” Weidel writes. “We have to create a competitive advantage by giving ourselves the best shot of succeeding early. And the only way to do that is to give it everything we have right from the start.”

By making a Herculean effort early on, when your initial enthusiasm is high, you build the momentum to keep going when the going gets tough. Your first successes will come faster, giving you the confidence, courage and resources to carry on.

Expending so much time and effort, this initial thrust is also sure to create waste. That’s to be expected, Weidel says, because you don’t know what’s going to work. “When you start something new, you’re inefficient because you haven’t done it before,” he explains. “Looking back, you can see what you did that was unnecessary.”

Once you’re successful, you will need to become more efficient just as a plane, once airborne, burns less fuel, he adds.

Will an all-or-nothing approach guarantee success? No, but your level of activity and effort is just about the only thing you can control to improve your odds. “Why not do everything in your power?” Weidel challenges.

Perhaps your subconscious mind won’t permit you to lay that much on the line. Giving something 90 percent is “a fantastic form of psychological protection,” writes Peter Shallard, known “The Shrink for Entrepreneurs,” in a blog post “Why You’ll Never Give Things Your All.”

Holding back just a tad insulates you from the risk of failure destroying you. It cushions your ego and separates your identity from the possible rejection or failure of your work. It allows for the possibility of giving more and doing better next time, and each successive time. In short, it’s healthy and sustainable, Shallard says.

In his experience, successful serial entrepreneurs consciously or subconsciously pour less than 100 percent into their work, leaving some fuel in reserve. Highly successful people get that way by failing a lot — Shallard calls it the entrepreneurial learning curve. To follow in their footsteps, “Hard work is mandatory, but you need to preserve your energy and physical health so if your thing doesn’t work out, if it doesn’t reward you with the millions of dollars and bathtubs of champagne you were hoping for, you can pick yourself up and dust yourself off,” Shallard says.

If nothing else, failure is a fantastic learning experience, “but if you deplete yourself utterly, then you can’t make anything of it,” he adds.

Another problem with giving your all is it diverts energy from other aspects of your life, such as your health and family. Shallard wonders if an endeavor that exacts such a toll is worth doing.

That’s not to say that successful entrepreneurs are paragons of work-life balance. “Super-successful people aren’t holistic; they work maniacally,” he says. “But they create a structure that helps support that and makes it sustainable” until they hit the big time.